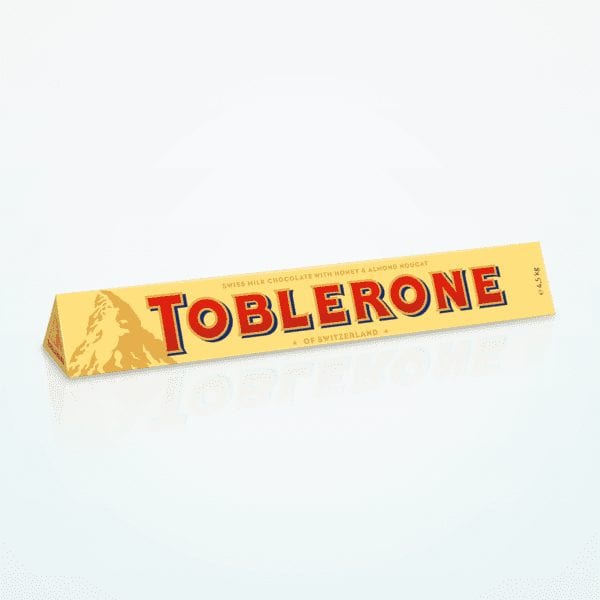 The Chocolate Toblerone Jumbo Bar is the largest Toblerone bar in production. Weighing a massive 4.5 kg, this giant Toblerone bar is the best way to reward yourself or a loved one! Nevertheless, the taste of the classic Toblerone we all know and love, remains untouched.

The Chocolate Toblerone Jumbo Bar is the largest Toblerone bar in production. Weighing a massive 4.5 kg, this Toblerone bar is the best way to reward yourself or a loved one! Nevertheless, the taste of the giant Toblerone chocolate we all know and love remains untouched.

The chocolate bar stays true to its classic recipe. Made from creamy Swiss milk chocolate, along with honey and almond nougat, this Toblerone bar would make an ideal gift for any Toblerone lover. In addition, Toblerone Chocolate Bar is perfect for sharing among friends and family! Most importantly, it will surely satisfy even the biggest sweet-tooth!

Besides the shape and the material, a packaging layout also plays an important role. The inventors of Swiss export success Toblerone also managed to create a name with a high recognition factor. And Toblerone is indisputably a combination of Theodor Tobler’s surname and torrone, a nougat-like dessert. The Toblerone packaging’s triangular cross-section is still the most important element of the company’s brand communication. Customers immediately recognize the box’s striking shape, regardless of size, which ranges from “Jumbo” to “Tiny”.

Theodor Tobler (Jean Tobler’s son) and Emil Baumann (production manager and cousin of Tobler) invent unique chocolate – Toblerone! It is a play on words from the names “Tobler” and “Torrone,” the Italian name for honey-almond nougat. Therefore, the author wanted his surname as a core part of the brand.

1970
The Matterhorn appears on the pack

The Matterhorn only appeared on the packaging of the Toblerone in 1970, not yet on the front, but initially only on the two sides of the head.

2000
The Berner bear and the Matterhorn

The blue and white Tobler logo disappears, the Matterhorn now appears on the packaging in its place. However, there was intentionally something hidden in the Matterhorn.

Toblerone chocolate packaging, with its prismatic shape and sweet triangular content, celebrated its 110th anniversary. People agree nowadays that the unusual idea of creating pyramid-shaped chocolate was a resounding success and quite deserving of a packaging icon.

There are no reviews yet.

Be the first to review “Toblerone Jumbo 4.5 kg” Cancel reply